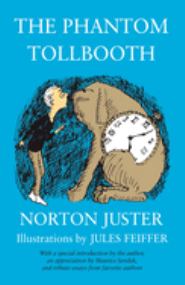 "There once was a boy named Milo who didn't know what to do with himself - not just sometimes, but always." So begins my number one favorite children's fiction book of all time. I first read it when I was in seventh grade and have revisited it scores of times since then. It didn't win the 1962 Newbery--The Bronze Bow by Elizabeth George Speare did--but it, along with the picture book, Where the Wild Things Are, by Maurice Sendak (which did win the Caldecott Medal in 1963), has the place of honor in my children's book-loving heart.

Glum and bored with his life, Milo thinks everything is pointless, too much trouble, and a waste of time, especially the process of seeking knowledge. "And worst of all," he muses dejectedly as he walks home from school, "there's nothing for me to do, nowhere I'd care to go, and hardly anything worth seeing." Back in his bedroom, he comes upon an enormous package. On the affixed envelope is written, "FOR MILO, WHO HAS PLENTY OF TIME." Inside is one genuine turnpike tollbooth, a map, assorted coins for paying tolls, a book of rules, and this curious assurance: "Results are not guaranteed, but if not perfectly satisfied, your wasted time will be refunded." The map is filled with unfamiliar places, so he selects a destination at random: Dictionopolis. Climbing in to his small electric toy car, Milo drives up to the tollbooth and deposits a coin, saying, "I do hope this is an interesting game, otherwise the afternoon will be so terribly dull."

Immediately, he finds himself speeding along an unfamiliar highway in the kingdom of Wisdom. Pulling up to a sign that says "WELCOME TO EXPECTATIONS," Milo encounters the first of many surprising, peculiar, and downright eccentric characters, the Whether Man, whose job is to hurry people along to Expectations, "the place you must always go to before you get to where you're going." Continuing on his drive, Milo stops paying attention to the road and gets stuck in the Doldrums, "where nothing ever happens and nothing ever changes," and, according to the dull creatures who live there, the Lethargarians, it's against the law to think. Luckily, he is rescued by Tock, a seemingly ferocious watchdog with a huge ticking alarm clock embedded in his left side, who becomes his traveling companion. Together, they drive to Dictionopolis, a city where all the words in the world are grown in its orchards and sold at the marketplace. Here Milo meets the Spelling Bee, an insect twice his size, who can spell anything; the dislikable Humbug, a beetle-like creature dressed in an overcoat, derby hat and spats; short Officer Shrift, who arrests Milo and Tock and locks them in the dungeon; and Faintly Macabre, the not-so-wicked Which. Whew. The sublime wordplay flows fast and furious as Milo and Tock set out to find the princesses Rhyme and Reason who have been banished to the Castle in the Air by the warring brothers, King Azaz the Unabridged of Dictionopolis and the Mathemagician, ruler of the kingdom of Digitopolis, where numbers reign supreme.

Famed political cartoonist Jules Feiffer's scratchy fine-lined drawings are masterful and memorable. What you probably don't know is that Juster, whose other career was as an architect, and Feiffer were roommates in a Brooklyn Heights apartment, when Juster wrote this, his first book, and Feiffer did the sketches for it. "I had no idea when I wrote it that it would last more than 15 minutes," said Juster in an October 5, 2009 interview for Publisher's Weekly, "Norton Juster and Jules Feiffer: Once Upon a Half Century." Mind you, it's sold more than three million copies. Juster is also the author of The Hello, Goodbye Window, for which illustrator Chris Raschka won the 2006 Caldecott Medal. And in the late 1990s, Feiffer added a new facet to his career, writing and illustrating picture books, including the standout, Bark, George, and novels for children, including The Man in the Ceiling. Some other exciting news is that Juster and Feiffer are again collaborating, this time on a picture book called The Odious Ogre due out in fall 2010, for Michael di Capua Books at Scholastic. Can't wait!

Carroll, Lewis. Alice’s Adventures in Wonderland and Through the Looking Glass and What Alice Found There. Morrow, 1993, c1872.

Feiffer, Jules. The Man in the Ceiling. HarperCollins, 1993.

Edwards, Julie. The Last of the Really Great Whangdoodles. HarperCollins, 1974.

Lin, Grace. Where the Mountain Meets the Moon. Little, Brown, 2009.

Rupp, Rebecca. Journey to the Blue Moon: In Which Time Is Lost and Then Found Again. Candlewick, 2006.