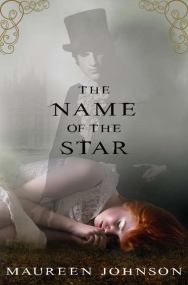 The Name of the Star

This may sound strange but this is a novel about a gruesome serial killer that manages to be … quite funny. Really.

A Louisiana teen named Rory Deveaux transfers to a London boarding school for her senior year because her parents, academics, have taken university positions in England. But Rory’s European adventure does not begin auspiciously. She arrives at Wexford Academy with the city in an uproar over a vicious murder, the most unsettling feature of which is that it completely mimics the first gruesome crime ascribed to the infamous Jack the Ripper. Jack, whose real name was never known, is considered the world’s first serial killer, having disemboweled a number of women in 1880s London.

One more fact: Jack was never caught. He did, indeed, get away with murder.

The big fear with this latest murder is that there is a copycat at work, which will mean more murders in short order. This, understandably, sets the city (and Rory’s parents) on edge. Worse, there are no leads and no witnesses – except Rory, that is. Rory spotted the man police believe to be the prime suspect. She doesn’t tell her parents this, however, mostly because her roommate, who was with her at the time, didn’t notice the man at all.

Is Rory losing her mind? Or is there something truly spooky going on in London?

Now about the funny part. Again, it’s Rory. She narrates the story and her snarky, self-deprecating wit provides a light counterpoint to the otherwise grim events. When the snobbish head girl shares with the dinner table that Rory has told her she lives in a swamp, Rory doesn’t miss a beat: “That’s right,” I said, turning up my accent a little. “These are the first shoes I’ve ever owned. They sure do pinch my feet.”

The secondary characters are well drawn, especially house mother, Claudia, whose true passion is field hockey, and Rory’s square-but-sensible roommate, Jazza, “the kind of person who used ‘whom’ correctly while gossiping.”

The story comes to a satisfying, if terrifying, conclusion, but there’s also a revelation that will leave readers eager for more. And there should be plenty of readers. Johnson’s winning blend of history, mystery, a paranormal element, romance, and humor makes this the rare book that will appeal to almost every reader.