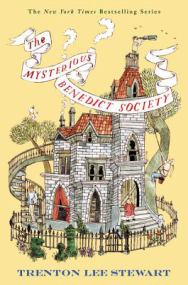 “ARE YOU A GIFTED CHILD LOOKING FOR SPECIAL OPPORTUNITIES?” That newspaper ad brings together four resourceful and multitalented children, all of whom are orphans or alone in the world, to become secret agents for Mr. Benedict, a genius who has uncovered a nefarious international mind-control plot. There's Reynie Muldoon, whose logical thinking helps him solve puzzles; Kate Wetherall, who can climb anywhere and fix anything with her tool-filled bucket; tenacious Sticky Washington, who has total recall of everything he's ever read; and the diminutive Constance Contraire, whose crabby and belligerent demeanor is her greatest gift. Their mission will be to infiltrate the exclusive Learning Institute for the Very Enlightened and to discover how and why the school's founder is transmitting subliminal doctrinaire messages into people's brains. Turns out the guy plans to take over the world.

Readers who thrive on problem-solving novels like Blue Balliett's Chasing Vermeer, Eric Berlin's The Puzzling World of Winston Breen, and Ellen Raskin's The Westing Game will enjoy the fast-paced intrigue, while lovers of James Patterson’s exhilarating Maximum Ride books will identify with the kids-save-the-world theme. Ask your own intrepid adventurers to think about their own singular and perhaps unrecognized talents and figure out how these attributes have helped them solve problems and puzzles in their own lives.