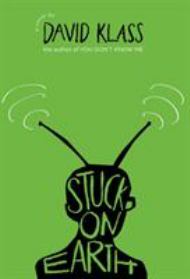 Ketchvar III, a snail-like creature on a mission from the planet Sandoval IV, begins his narrative thus: "We are skimming over the New Jersey countryside in full search mode, hunting a fourteen-year-old." Down below, a target has been selected: Tom Filber. Much to Tom's horror, Ketchvar crawls out of his shell, slithers through Tom's nostril, crawls into his cranium, and takes possession of his brain. Using the Thromborg Technique, Ketchvar locks Tom's consciousness into a Ragwellian Bubble, suspends it in his parietal lobe, and takes over his body. The good news is that Tom is conscious of Ketchvar's actions, and can communicate with him by thought. While Ketchvar can speak English, he is unaware of its many nuances of expressions and slang. His formal Conehead-like speech makes people think Tom, a boy known to all as Alien, is even weirder than usual. His observations about the human condition are very much on target, however, as he observes Tom's dysfunctional family and tries to deal with all of the cruel bullying his classmates bestow upon him.

Ketchvar's mission is to decide if the Homo sapiens on the polluted planet Earth should all be destroyed to make way for a takeover by Lugonians. While the story is truly comical and inventive, there are dark forces as well. For one, Tom/Alien is humiliated on a regular basis by his peers, led by a vicious classmate named Scott, and even Ketchvar, with his superior intelligence, has no idea how to make them stop. Ketchvar's decision is complicated by his soft spot for the kind and lovely Michelle Peabody, the girl next door, on whom Tom has always had a huge crush.