On the night of November 8th, 2016, I was poised to celebrate. A woman was about to be elected president of the United States. A woman! I’m not that old and yet I remember so much casual sexism growing up, so many lessons I was taught that, in hindsight, were about preserving the patriarchy, not my safety or well-being. I may have been late to the party, as it were, but I was 100% ready for a female president. Women had been fighting for this moment for so long. And now here we were, shattering the glass ceiling once and for all.

Of course, that’s not what happened.

Grace and Fury was born out of the disappointment and anger I felt that night. Because of that night, Serina and Nomi, Grace and Fury’s main characters, were born into a world that oppressed them and dismissed them at every turn.

There’s an old adage that a writer should “write what you know.” I don’t know what it’s like to not be allowed to read, as in Grace and Fury. Or how truly terrifying it is to be forced to fight to the death. But I do know how heavy the weight of expectation can feel. And the difficulty of trying to be your own person when everyone around you is telling you to follow the crowd. Don’t make waves. Be pleasant.

One of my favorite details in Grace and Fury is a tidbit about the history of the patriarchal world. We discover that women have been oppressed not because they’re seen as weak but because men are afraid of them. This idea—that women are a threat to the status quo and therefore dangerous—was something I played with a lot in the book. Because, as sad as it is, it’s a dynamic I see all around me in real life. Mansplaining, as a way to undercut a woman’s expertise or experience. That’s a response to a threat. Setting women up to compete with one another instead of encouraging them to work together—divide and conquer. A response to a perceived threat. And how many of us remember a powerful woman being condemned by the media, not for being inept or corrupt, but for being overprepared? Strong women that question and fight back against a system that limits their opportunities and freedoms are, for those who support and buy into the patriarchy, frightening.

In Grace and Fury, not every female character is strong in the same way. But they all, to different degrees and at different times, fight to subvert or dismantle the system holding them back. And, importantly, they aren’t the only ones. There are male characters who are uncomfortable with the status quo as well. Because feminism isn’t about man hating or elevating women above men. It’s about striving for equality. Equal opportunities, an equal seat at the table.

My characters may live in a world much harsher and more oppressive than the one I’m privileged to live in. But we are all fighting for the same thing. I still have hope that I’ll get to celebrate the election of a female president someday. But if the last two years has taught me anything, it’s that nothing will change without working for it. Like Serina and Nomi at the end of Grace and Fury, I—we all—still have a lot of work to do. 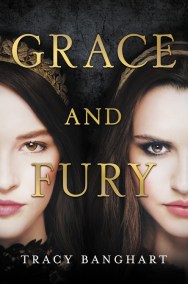 Bold, brutal, and beautiful, this must-read fantasy is full of fierce sisterhood, action, and political intrigue for fans of The Selection series, Caraval, and The Handmaid's Tale.

Serina Tessaro has been groomed her whole life to become a Grace—someone to stand by the heir to the throne as a shining, subjugated example of the perfect woman. It's her chance to secure a better life for her family, and to keep her headstrong and rebellious younger sister, Nomi, out of trouble. But when Nomi catches the Heir's eye instead, Serina is the one who takes the fall for the dangerous secret her sister has been hiding.

Trapped in a life she never wanted, Nomi has only one option: surrender to her role as a Grace until she can use her position to save Serina. But this is easier said than done...a traitor walks the halls of the palazzo, and deception lurks in every corner. Meanwhile, Serina is running out of time. Imprisoned on an island where she must fight to the death to survive, surrounded by women stronger than she is, one wrong move could cost her everything. There is no room for weakness on Mount Ruin, especially weaknesses of the heart.

Thrilling and captivating, Grace and Fury is a story of fierce sisterhood, and of survival in a world that's determined to break you.