Picture hundreds and hundreds of book-starved educators prowling the grounds in search of storytellers and picture makers. Splash that thought with an array of neon colors and literary lust to rival Grateful Dead fandom, and that pretty much describes the two-and-a-half days I spent in Michigan for the literary feast known as Nerd Camp.

Day One felt a lot like the first day of school. I didn’t know anyone. Everybody appeared paired off. And I felt out of place. But I gave her the best presentation I knew how to give.

Day Two went better. Over a potluck in a small teacher’s lounge, I had the chance to talk about my insecurities as a burgeoning illustrator with presenters from the previous morning. Anne and Jerzy Drozd, author-illustrators of Science Comets Rockets, shared tips from their amazing collaboration. So did Judd Winnick, (Hilo).

And just like that, I wasn’t an outsider anymore. I was sitting with the cool kids, sharing ideas and information. The campus of the Michigan high school where we were located was taken over by over a thousand students. I had fourth graders. They’re the best, in case you’re wondering.

Sigh! Before we knew it, the experience came to an end. Emails were exchanged. Hugs, too. Next time …I’ll be brave. 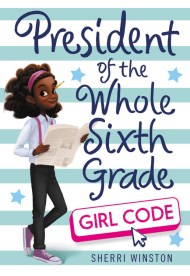 Go-getter Brianna Justice is back and on assignment with her local newspaper in this third book in the popular President series!

When budding middle school journalist Brianna Justice learns that Yavonka Steele, rising star of the nightly news broadcast, is looking to mentor a student as part of a program at her school, she's thrilled! That is until she's paired instead with a "boring" reporter from the community news desk.

But when she's asked to interview students from a girls' coding program at Price Academy, an inner-city middle school, this suburban girl has no idea what to expect. Will Brianna learn to ignore stereotypes and embrace the world around her?

Sherri Winston crafts another winning story in the President series, full of humor, heart, and a deeper examination of stereotypes and how they can throw a wrench in middle school life.