In the years since my debut novel None of the Above was released, I’ve been asked by countless teachers and librarians what I was working on next. My stock answer was that I was working on being a full-time physician and mother, but that was only part of the truth. The real answer was that I needed to find the right story, one I believed in so strongly that I was willing to take time from my other responsibilities to write it.

After five years, I finally found that story. Or rather, it found me.

My child was entering the tween phase of their life, and I was beginning to see in them a growing anxiety, and periods of melancholy that reminded me—terrifyingly—of the several bouts of depression that I’ve experienced in my life. Almost immediately, my focus as a mother turned from Girl Scouts and science fair projects to wondering what I could do to give my daughter the vocabulary to identify her feelings, the permission to be sad and anxious, and the grace to understand that it’s not shameful to seek help if you need it.

It’s a set of tools that I—like many people, particularly children of immigrants—never had.

Despite decades of mental health awareness efforts—remember when Tipper Gore hosted the White House’s first Conference on Mental Health in 1999?—there is still so much work to be done.

Understandably, stories on death by suicide dominate headlines, whether it be by celebrity chefs, fashion designers, or K-Pop singers. But there is a danger to having the narrative surrounding mental illness be too focused on this devastating endpoint, without talking about the long lead-up to this endpoint. There are so many opportunities for prevention and intervention, starting with self-recognition and leading up to the decision to enter therapy and take medications.

Vital, too, is that people start talking about the specific problems that diverse communities face in getting mental health care, whether that be cultural taboos, language barriers, or access to insurance. I’ve spoken to too many first generation immigrants who’ve never spoken with their parents about their depression, because it’s considered an “American disease”.

I had my first bout with depression in college, prompted by a cluster of things: a thwarted romance, academic setbacks and a fear of the future. I’d be lying if I said I had a clear memory of that time other than a fog of dread, and a remembrance of how painfully impossible it seemed to get out of bed. Somehow, by the grace of god, I got myself into therapy, but I stopped going once I felt better. I wanted to prove that I was strong enough to get through it on my own.

After my second major depression, I reluctantly started medications, in a desperate attempt to stave off my exhaustion in life. Once again, after I felt better I stopped. On none of these occasions did I ever tell my family—in fact, my grandfather, who raised me, passed away without ever knowing that part of me.

I had a third episode of depression, and again stopped medication after a few months of improvement. It wasn’t until my fourth fight with the Noonday Demon that a psychiatrist finally imprinted onto my head the fact that needing pills was not a weakness.
“Your brain just needs serotonin,” she said, shrugging nonchalantly. It was her matter-of-factness, her translation of what I considered to be a character fault into a natural chemical imbalance, that finally convinced me that I didn’t have to live life without medication again.

And I was a doctor! I had studied the science, I knew that my response to life was managed by a complex, ultimately unknowable interaction between neurotransmitters and the cells in my brain, yet still I was pushing back against medications. What hope did everyone else have?

Over the years I’ve come to internalize the fact that crazy is the new normal—and yes, I’m intentionally reclaiming the word “crazy.” Sadness and anxiety are natural, and asking for help is not weakness.

When I look at my children, I understand that kids need help coping with emerging mental illness way before times of crisis, and they specifically need guidance from adults, and a normalization of mental illness, to allow them to be receptive to treatment options like therapy and medications.

When I sat down to write This is My Brain In Love, my goal was to write a (mostly) happy story about mental illness as experienced by the immigrant community. What I ended up writing was a YA contemporary about a Chinese girl and a mixed-race Nigerian boy navigating friendship and romance through the lens of intersectional mental illness. It features food joy, a failing business, and LOL microaggressions (in no particular order).

In the first line of This is My Brain In Love, I assure you that it has a happy ending, because I feel very, very strongly that all kids with mental illness deserve to realize that they can get one, no matter how long or difficult the struggle. The story intentionally does not have an active suicide, but discusses the notion of passive suicidality, which is often an under-recognized precusor to a more final act.

It’s frightening to come out in public as being on medications. As a physician, I wonder what my colleagues will think of me, of whether my patients will worry that they can’t trust me or my abilities. But I’ve come to terms with that possibility. In being public with my own long battle with depression, I hope to show my children, and others, that they, too, can march through sadness and find joy. 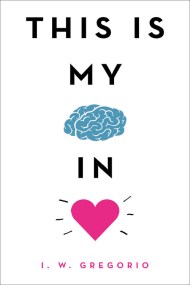 Told in dual narrative, This Is My Brain in Love is a stunning YA contemporary romance, exploring mental health, race, and, ultimately self-acceptance, for fans of I Am Not Your Perfect Mexican Daughter and Emergency Contact.

Jocelyn Wu has just three wishes for her junior year: To make it through without dying of boredom, to direct a short film with her BFF Priya Venkatram, and to get at least two months into the year without being compared to or confused with Peggy Chang, the only other Chinese girl in her grade.
Will Domenici has two goals: to find a paying summer internship, and to prove he has what it takes to become an editor on his school paper.Then Jocelyn's father tells her their family restaurant may be going under, and all wishes are off. Because her dad has the marketing skills of a dumpling, it's up to Jocelyn and her unlikely new employee, Will, to bring A-Plus Chinese Garden into the 21st century (or, at least, to Facebook).
What starts off as a rocky partnership soon grows into something more. But family prejudices and the uncertain future of A-Plus threaten to keep Will and Jocelyn apart. It will take everything they have and more, to save the family restaurant and their budding romance.