This book is an accident; three things made it possible. I design products and services for women and girls, I missed drawing, and I just gave birth.

A year and a half ago, I had my second kid. I wasn’t ready to get back to my full time job yet; I was breastfeeding and my brain was addled from lack of sleep. Motherhood was lovely, rewarding and all that, but it was still boring. I had a maker’s urge to use my hands and mind to create something.

A pop-up shop opened up a block away and they were looking for local makers, I decided to make “kickass women” candles. A few months before, I walked by a holiday market that was selling secular saint candles. They had a couple of dozen of inspiring scientists, mathematicians, and artists, all of them men and one proud and lonely Frieda Kahlo. I was annoyed. From children books, to online Iists of the “most inspiring people”, to design conferences and innovation panels, it’s always the same. At best, there is a light sprinkling of token women present.

To help thrust undeservedly underappreciated women into the light, I made large stickers of a dozen drawings of my heros like Ada Lovelace to Valentina Tereshkova and attached them to glass candles. I started recovering my drawing skills and the pop up shop sold the candles faster than I could make them. It was a fun project, but I enjoyed the researching women and drawing part much more than buying, cleaning, stickering, carrying, and occasionally breaking heavy glass candles part. So, I dropped the candles and started working on a book of drawings.

There are millions of outstanding women in our world, and I couldn’t draw all of them. An A-Z alphabet structure constrained me and offered me a challenge. Month after month, I kept researching women and making drawings. I spent hours bantering with my husband and making alliterative descriptions. ‘F is for Florence Nightingale, Fighter of Filth’ came easy. We tried so hard with X, but still ended up cheating — the best we could do for Xue Xinran, was ‘Xenacious Explorer of the Unheard’. I wrote a short paragraph about each woman and I laid out the book in Adobe indesign.

The women in the book have a wealth of backgrounds and identities: aboriginal, Asian, African and white, young and old, strong, smart, harsh and kind.  And, all of them were brave and stubborn. They flew to space, won marathons, led pirate fleets and created Harry Potter. I hope they will inspire my kids and yours. Enjoy The A-Z of Wonder Women. 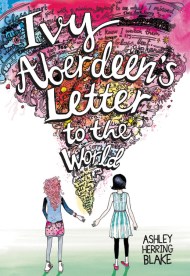 In the wake of a destructive tornado, one girl develops feelings for another in this stunning, tender novel about emerging identity, perfect for fans of The Thing About Jellyfish.

When a tornado rips through town, twelve-year-old Ivy Aberdeen's house is destroyed and her family of five is displaced. Ivy feels invisible and ignored in the aftermath of the storm--and what's worse, her notebook filled with secret drawings of girls holding hands has gone missing.

Mysteriously, Ivy's drawings begin to reappear in her locker with notes from someone telling her to open up about her identity. Ivy thinks--and hopes--that this someone might be her classmate, another girl for whom Ivy has begun to develop a crush. Will Ivy find the strength and courage to follow her true feelings?

Ivy Aberdeen's Letter to the World exquisitely enriches the rare category of female middle-grade characters who like girls--and children's literature at large.