It’s my senior year of high school. I’m in my one-bedroom apartment, which I share with six other family members – my two brothers, mother, father, and a brown pit bull named Spike— in one of the most poverty-stricken neighborhoods in Cleveland. I will graduate high school in two days and leave for a small Ivy League college in Hanover, New Hampshire named Dartmouth. I got a full ride scholarship that opens doors of possibility previously closed to people like me. In this moment of fear, uncertainty, and doubt, I’m not a chosen one yet, those mythological people that overcome unimaginable obstacles and succeed despite naysayers, non-believers, and haters. The mountain in front of me is massive, towering, and seemingly impossible to climb. I wonder how I will do it and if the force is with me.

I do what any scared seventeen would do: I try to draw strength from outside sources. I blast Eminem’s song Lose Yourself, inhaling courage from each line of the song and 808 beats that blare through the crumbling walls of my apartment. “You better lose yourself in the moment, you own it, you betta never let it go. You only get one shot.”

Eminem is right. This might be my only shot. The pressure is overwhelming. I know what I’m up against. My guidance counselor has already laid out the daunting statistics to try and dissuade me from going to Dartmouth. He says he doesn’t want to see me fail, but in reality, he doesn’t believe in me. He believes more in the mountain in front of me since he’s seen many students succumb to it. “Only twenty one percent of first-generation college students graduate college. The first-generation student dropout rate is four times higher than that of students with at least one parent with a degree.”

I wish I had a manual for how to how to get through what’s coming. I need a book to tell me how to navigate this new world of collegiate life. No one in my family has gone to college and many haven’t even graduated high school. I feel like I’m in over my head.

While it’s not a manual, my second book, The Chosen One: A First-Generation Ivy League Odyssey, is a poignant detailing of my journey from that one-bedroom apartment to the halls of elite, higher education at Dartmouth. I have boiled down the fruits of my struggle into lessons about what it takes to ascend and climb the mountain of impossibility that stops so many who are unable to overcome the challenges, which are legion and brutal.

The most important lessons being finding support and believers early on. Believers, people who can see your gifts despite where you have come from, are critical in giving you the strength to keep going. Taking advantage of the tremendous resources –including counselors, networking, tutors, academic student centers—available on prestigious campuses can bridge the gap between where you start and where you end up.

Ultimately The Chosen One proves that while first generation college students start generations behind, the path demands you keep walking forward no matter how hard it may become. Instead of focusing on the massive journey ahead, one should instead keep their perspective trained on the next right step in front of them. Eventually, all of those steps add up to an incredible story of overcoming, but in the midst of battle, the only thing that matters are the individual strikes, which bring you closer to victory.

Your success as a chosen one is not your own. It is shared by your family, community, and the generations coming behind you. The chosen one becomes a beacon of possibility for the others, a burden that no individual should have to bear, but is asked of those standing at the intersection of hope, endurance, and luck.

Newly appointed supreme court justice Ketanji Brown Jackson told a story of how as freshmen at Harvard, she began to feel out of place and was uncertain if she should remain at the school. In this deep state of uncertainty and self-doubt, she passed another black woman student on campus who must have seen the look for fear and dread on her face. The other student, whom she did not know, said something to her as they passed each other: “persevere.” That one word motivated Ketanji to keep going despite her internal uncertainty. Ketanji kept walking and eventually walked all the way to the Supreme Court of the United States of America. That is the power of persevering.

My message in The Chosen One is the same: persevere. Do not miss your chance to blow. This opportunity comes once in a lifetime, as Eminem raps. It is an opportunity that has been delivered to you by the blood, sweat, and tears of the ones that came before you. Your one job on the path is to keep walking and persevere. May the force be with you as you walk forward, always. 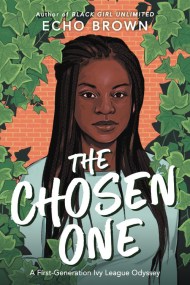 Echo Brown testifies to the disappointments and triumphs of a Black first-generation college student in this exploration of the first year experience.

There are many watchers and they are always white. That’s the first thing Echo notices as she settles into Dartmouth College. Despite graduating high school in Cleveland as valedictorian, Echo immediately struggles to keep up in demanding classes. Dartmouth made many promises it couldn't keep. The campus is not a rainbow-colored utopia where education lifts every voice. Nor is it a paradise of ideas, an incubator of inclusivity, or even an exciting dating scene. But it might be a portal to different dimensions of time and space—only accessible if Echo accepts her calling as a Chosen One and takes charge of her future by healing her past. This remarkable challenge demands vulnerability, humility, and the conviction to ask for help without sacrificing self-worth.

In mesmerizing personal narrative and magical realism, Echo Brown confronts mental illness, grief, racism, love, friendship, ambition, self-worth, and belonging as they steer the fates of first-generation college students on Dartmouth’s campus. The Chosen One is an unforgettable coming-of-age story that bravely unpacks the double-edged college transition—as both catalyst for old wounds and a fresh start.